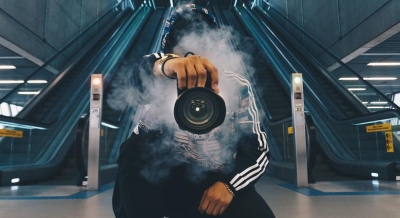 New Delhi – A day to celebrate the creativity and nuances of photography that have fascinated us for years. Photography is a timeless medium of storytelling that beautifully captures the authenticity of time, emotions, culture, history, and more.

World Photography Day is celebrated annually on August 19 and is dedicated to the art, craft, science and history of photography. To commemorate this medium, let’s look at these mesmerizing images that are part of MAP’s exquisite collection of iconic photography by renowned photographers such as Jyoti Bhatt, Karen Knorr, TS Satyan, Mitter Bedi, and more.

This image was photographed by Jyoti Bhatt in Rajasthan in 1973. It shows a clever juxtaposition depicting the relationship between prey and predator through art and everyday life.

This image is part of the ‘India Song’ project, which was started by British-American photographer Karen Knorr in 2008. It shows a digitally inserted peacock standing in a passageway in the Zenana Mahal at the City Palace in Udaipur.

The project seeks to explore ideas of caste, femininity and hierarchy intertwined with the rich cultural heritage of Rajasthan by linking royal spaces to the animal world with a harmonious combination of digital and analog photography.

This photograph by Sebastiao Salgado shows three coal workers at one of the Dhanbad coal mines in Bihar, India. Part of Salgado’s social documentary work, the image provides insight into working communities and the state of their immediate surroundings.

This is a portrait of HH Maharaja of Jaipur Ram Singh, GCSI Photographed by one of the oldest photography studios in the world, Bourne & Shepherd, the image shows Maharaja Sawai Ram Singh II of Jaipur. Becoming king at the age of sixteen months, Sawai Ram Singh was known as a reformist leader. He was also an avid photographer, with an interest in portraiture and landscapes, having gained the reputation of “prince photographer”.

This is a studio portrait of Maharaja Sir Bhagwati Prasad Singh of Balrampur taken by Johnston & Hoffmann studio. The royal portrait presents an excellent example of hand-painted photographs, where the artists have beautifully showcased the beauty and richness of clothing, jewelry and furniture.

This photograph is part of a collaborative project between Pushpamala N and Claire Arni entitled “Native Women of South India: Manners and Customs”. Belonging to the sub-series titled “The Native Types”, the images in the collection look at popular tropes and representations of South Indian women from a performative perspective. This particular image called “Lakshmi” is modeled after an oleograph by late modernist painter Raja Ravi Varma.

This studio photography is from the extensive work of Suhag Studio in Nagda, Madhya Pradesh, India, owned and operated by photographer Suresh Punjabi. The image shows a woman posing with a bunch of fake grapes. It was common practice for photo studios to keep props and costumes for clients, giving them the space and opportunity to be playful, eager and explore their own images.

This photograph taken by the late Indian photographer TS Satyan shows women at work in the Indian telephone factory in Bangalore at the end of the 20th century. The women seem to be assembling telephones on their stations. The image shows a great example of female labor in technical fields in a transforming India.

This photograph was taken by the late Indian photographer Mitter Bedi which shows an industrial setup of the 1961 Hindustan Unilever. Mitter Bedi was India’s most notable commercial and industrial photographer who paved the way for generations to come. At a time when India, as a newly independent nation, was going through a phase of rapid industrialization, Mitter Bedi became the most sought after photographer to chronicle this growth in various sectors like petroleum, textiles, paper, sugar, mining, etc. with his photograph. .

This image shows the Manikarnika Ghat on the bank of the Ganges with the Gyanvapi Mosque visible in view. The mosque was built by the Mughal ruler Aurangzeb in 1669. In the foreground can also be seen large piles of firewood, which may have been used for cremation purposes. (IANS)