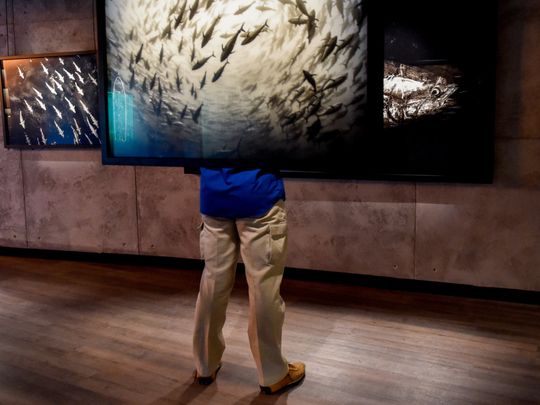 Gallery X celebrates world famous photographers and is dedicated to showcasing a selection of their works. The Deputy Ruler of Sharjah visited the exhibition, which marks its debut with a collection of photographic prints by award-winning Italian photographer Francesco Zizola and British photographer Anthony Lamb, whose works have appeared in major international magazines and newspapers.

The permanent exhibition also offered amateur and professional photographers the opportunity to participate in workshops led by world-renowned photographers.

Zizola’s collection of photographs is part of a long-term project on which the artist has been working for several years (2017-2019) and focuses on the relationship between man and nature. Water, or the deep sea, is the main subject of the images in the exhibition.

In his series of photographs titled “Escapes,” Lamb uses negative space and an ethereal aesthetic to provide the viewer with a sense of serenity and calm. The collection includes images of mangroves in Abu Dhabi, which are an integral part of the UAE’s coastal ecosystem.

2021-12-20
Previous Post: How these children learn an “empowering” art of storytelling, photography, with a loaner camera phone
Next Post: Ethan Moses built a massive 20×24 film camera