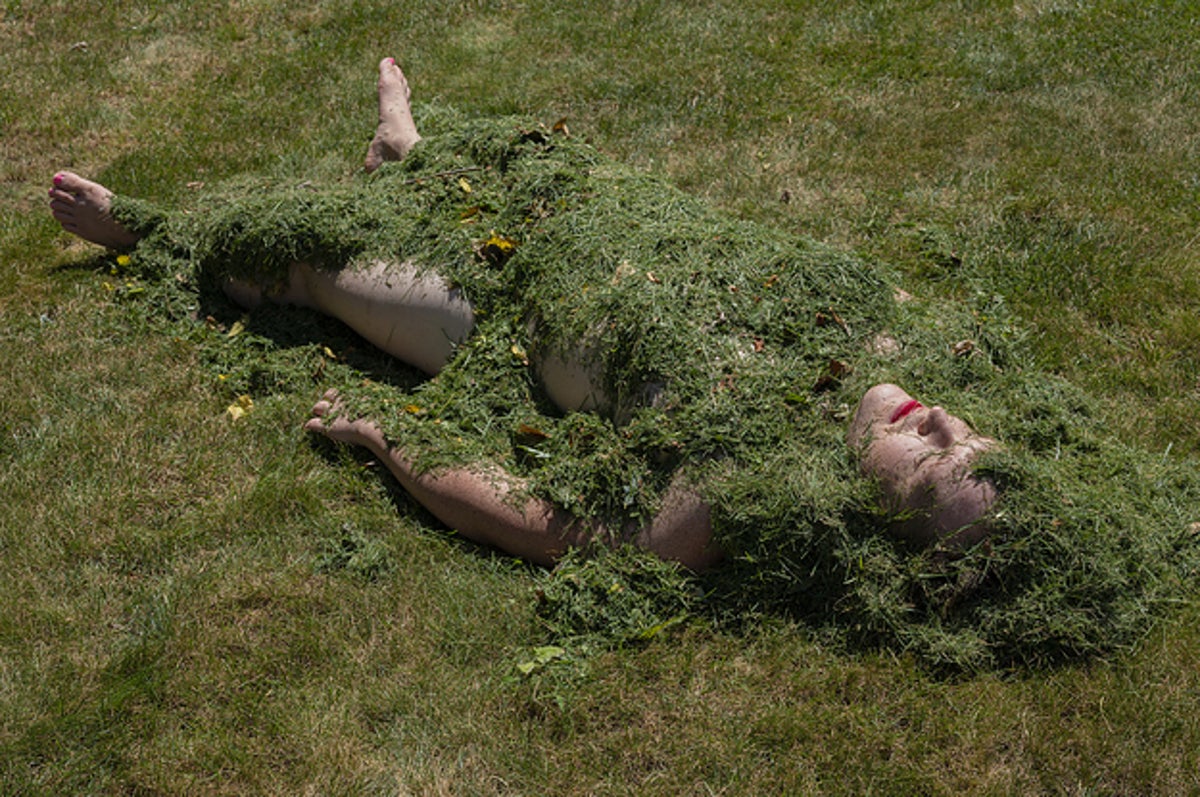 How this couple used photography to explore gender identity

When I first came across the work of Isla Gordon and Ashley Kay Gordon in 2021, it stopped me dead. The Gordon’s photos are personal and relatable, though they tell a very individual experience – how a couple and a house change as the two partners explore their gender identities.

The two are partners in life and art, but life came first. They met at a camera store in 2011, quickly fell in love, and married four years later. They both used photography as a way to understand domestic spaces and how they fit into the world at large. During the pandemic, both lost their jobs and studios, then left their homes to live with their families. Isla realized she was transgender and started her transition in 2020.

Their images explore the themes of the research, piecing together pieces of a larger puzzle around gender roles and their life experiences as different genders. Photos such as Isla naked on the lawn, covered in grass, or drinking a beer and working on her laptop outside in a lawn chair, testify to the realities of their nuanced domesticity. The images are a beautiful and interesting look at how we navigate traditional gender roles in our lives. Many of the questions raised in the course of their work arose during Isla’s transition and the life changes brought on by the pandemic.

Their work will be exhibited in November at Reform, a web exhibit publication from Stay Home Gallery, and in December to Satellite Art Show and Performance Is Alive at Miami Art Week, as well as Illuminate Art Walk in Raleigh, NC.

Ashley, who has proven to be non-binary over the past year, and Isla both told us about their work, the balance between life and art, and the new home in Pennsylvania they have moved into this. year.

Isla Gordon: The project we worked on most recently is called Startup Home. I have a coworker who called it “high documentary”, but Ashley doesn’t like that word. It is a project that documents our lives in the most honest way. I chose the name Startup Home because a starting house is a strange and untenable thing. It’s a new start, but it’s temporary. You have this house, you fix it, you sell it in a few years. It was a strange inflection point that seemed to reflect where we were at. It’s ambitious, but it’s wabi-sabi – things are going to be changeable and transient.

The physical realities of space are that things are constrained and arranged. The photos themselves show moments of privacy, some of them are more constructed, and some of them unpack the chores of the house. It’s to reckon with things that have been modeled by our mothers and fathers, which have their own weight. The “oh damn, we have to make art” would be times like my dad asking me when I was going to cut it (referring to the photo of the hedge trimmer), or [my father] telling Ashley not to let me use my gender not to lift heavy things, or my mom telling me that she never let me go to therapy when I was a teenager because she didn’t want me to become gay.

Ashley Gordon: With Startup Home, and our art more broadly, we want to show people a space like this and what a queer marriage or household can look like. When we returned to Pennsylvania, we left a small college bubble, which, despite all of its problematic power structures, was still a much more open and accepting space. Many of our friends and family weren’t ready for this. No one knew how much we had grown and learned, and it was a shock to us as we felt more and more comfortable in our own skin.

Isla: I got into photography primarily as a way to navigate my relationship with the world, and it’s been a journey ever since. I was born and raised in Pennsylvania, and have had a variety of different career starts and stops. I was in culinary school, cooked in beautiful resorts and great kitchens, and then went to graduate school to get my MFA in photography and related media.

Ashley: After Isla got her MFA, I went to University of Arkansas school and got my MFA in art studio, but majoring in photography. Much of my work has to do with our domestic space, understanding our relationship and my relationship to others, as well as my relationship to myself. I was raised in The Church of Jesus Christ of Latter-day Saints, also known as Mormons, and then I left. I’ve been looking for who I am without the church for years.

Before the transition, Isla was very calm and photography was a way to study her without sitting down, looking at her and asking her a ton of questions. We took nature walks and I took pictures as we went. This is how the project of taking pictures of each other began. It was part of my thesis work, leaving church, and discovering myself, who I was without the church, who I wanted to be and who I wanted to be in our relationship.

During those three years that we were working on the project, Isla came out as non-binary. Towards the end of my thesis year, she told me that she was transgender. As we dealt with it, we still took pictures. Isla’s growing awareness of her own gender identity has enabled her to be a more active participant, especially in Startup Home.

Isla: Initially, I submitted to the photographs because I cared about Ash and wanted to support them, but I was a much more passive participant. I improvised a bit in the studio, but was reluctant, maybe scared, to engage in the process.

Seeing the photos Ashley took, I started to realize that there were things about it that I liked, and I was like, What is that? Who is it? The way they photograph me, there’s a lot of sweetness and vulnerability, and it created a really positive feedback loop. I continued to unwrap my feelings and took a slightly more active role with one of our first truly collaborative photos, “Womanless Wedding,” where I slipped into a thrift store wedding dress.

When I realized that I was trans and came out, it started to evolve into a more deliberate but also uplifting project of trying to present myself the way I feel deep inside. me, this is the person I could be.

Ashley: We are building a new relationship and a new marriage in a domestic space we have never been in before. Queer, trans, what does that look like outside of church and the traditional presentation of the genre? Once we started working on it, we realized that a lot of these issues were still present in our marriage, and it had allowed us to work with them on the surface.

Isla: The transition has been a lot. I’m pretty determined and oblivious so it took me forever to realize this because I would always find something else to project all of my anxieties into. For a while, it was my art. When we lived in Arkansas, I was possessed in the studio. During the pandemic, I had to give up my studio, so I didn’t have the same kind of outlet or distraction. Removing the studio component kept me awake staring at the ceiling all night and thinking about who I really was. I’m kidding about it, but it was really in a few sleepless nights when I realized [that I was transgender].

I told Ashley, and we went into town and bought a pair of shoes and borrowed some shorts from Ashley and we went out into town. We went to lunch and to a museum, and I felt unconscious for the first time in my life, I felt good. I looked messy, but felt amazing.

Ashley: She does not have [look a mess]!

Isla: After moving to Pennsylvania, we were living with my mom and looking for work. I started working with a therapist because it’s a big thing and I wanted to be sure. From going out at Ashley to going out with the family, it took a few months, and I went out publicly in March 2021 on Trans Visibility Day, and it was full steam ahead.

There’s a lot of unlearning about expectations – the same ones we have at home, I’ve built my whole life around them. The idea that I needed to get my worth or prestige from an academic position at a big school, I realized that I didn’t really need it. It’s been a lot of discoveries of this stuff, and I put so much pressure on myself, around the art and everything, the way I present it, it’s been nice not to feel that pressure from outside and to ‘be a little more authentic.

Isla: There were so many expectations of us that we played because we felt it was expected or encouraged. Cooking, cleaning, taking care of finances.

Ashley: We realized how unhappy we were, and that was a big part of taking on new acting roles. We want to show people a space like this and what it looks like.

Isla: Expectations and pressures regarding gender roles were at the root of all conflicts in our marriage. We argued over things like money, with Ashley and her family expecting me to be in control of the finances and pay her money when needed. My reluctance to occupy the patriarchal role of head of the family was less about the role than the patriarchal association. The same could be said of my lack of contribution to cleaning and all the pressure Ashley feels to keep a house clean.

Isla: It’s so frustrating when you’re trying to come up with stories about yourself and what you see is cliché, redundant, or bad, and it can make you feel really lonely.

We try to be authentic and avoid clichés as much as possible, and try to share and photograph those moments that are not so easily readable. The times when you don’t feel safe or insecure and like you are just on the precipice of something new. The greatest compliment one can receive is when someone sees their experience in our art.

Ashley: We can’t wait to continue Startup Home by season changes. It is so much about who we are inside the house. I think it will happen if we stay home and keep growing. In the future, I would like to have an exhibition. We see it in a space of the future where we can create a space for queer expression. This is what I want to do and bring in a few more installation items.

Isla: I would say I’m very happy to start organizing our work in book or zine form. I have a lifelong fascination with family albums and their gendered history, and this seems like the perfect vessel for a lot of the ideas that we’re exploring.

2021-12-10
Previous Post: The talents of photography students in the spotlight at Pellissippi State
Next Post: Her Trusted Goal: Claudia Dian on the Art of Backstage Photography – People