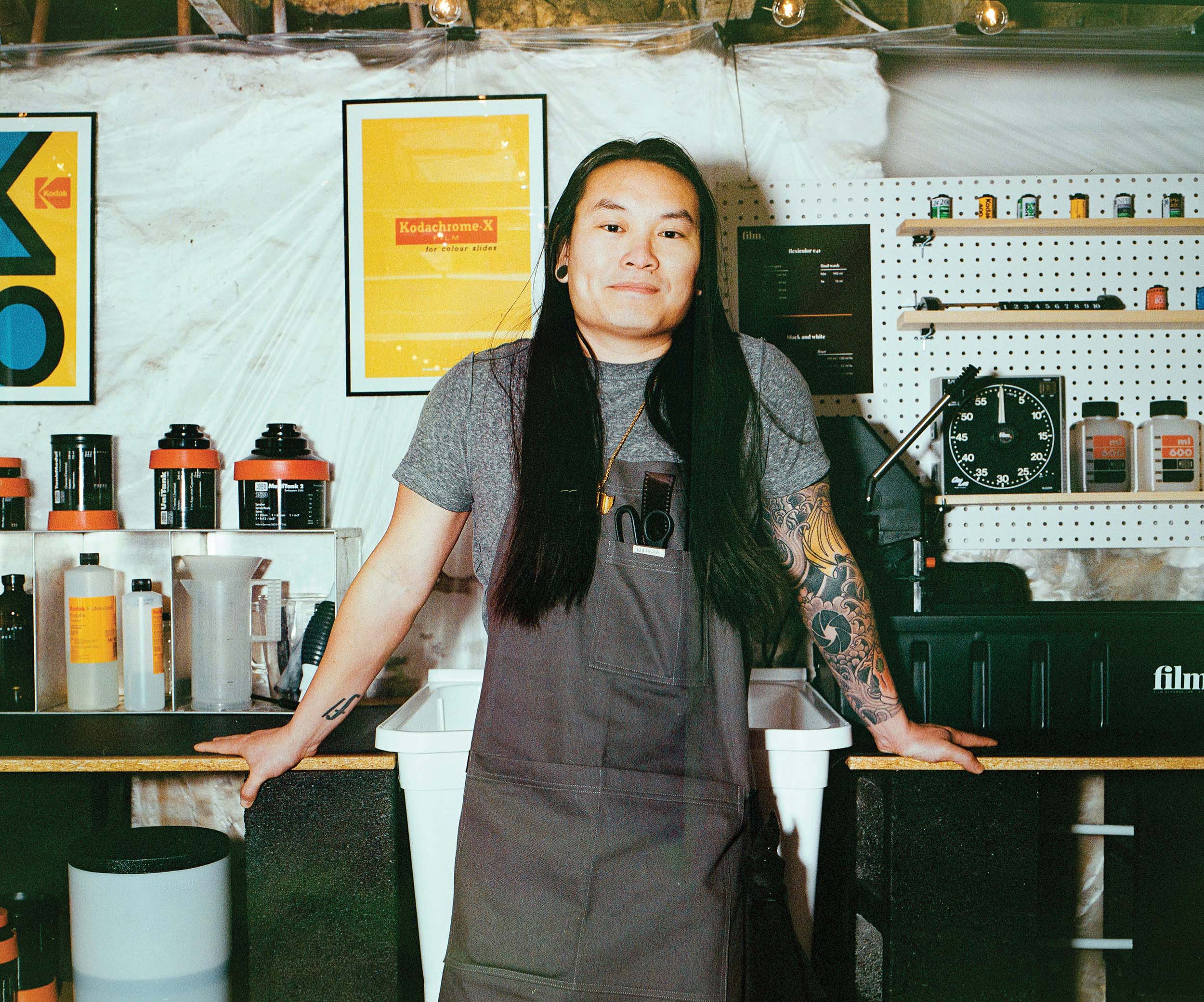 Travis Young in the FilmX lab. // Photo by Chase Beaver

[Editor’s Note: Several stories from June’s issue of The Pitch, hitting stands on the 1st of the month, feature photos shot on film and developed by FilmX. Make sure to pick up a copy to see further work from Young.]

In the age of TikTok and instant dopamine hits, creating and enjoying honest art takes practice. There has been a definite resurgence in the appreciation of analogue when it comes to music and vinyl records, but what about visual art?

Film photography offers an authenticity unmatched by the digital world. Creators are starting to come together to bring the lost art form of film development back into the community and make it more accessible to everyone involved.

The pitch: What is your history with photography, and how did cinema and its extended world become part of your work?

Travis Young: My dad was an amateur photographer, and he put a camera in my hand when I was a kid for fun. Over the years, my dad slowly stopped messing with the cameras and I was on the reverse curve of that fallout. In high school, I photographed a lot of groups of my friends and started doing portraits of seniors and family. Then weddings. I went to college and started working for University Daily Kansan and learned journalism and sports photography. After traveling to photograph KU Basketball, I did a season with the Kansas City Chiefs’ in-house photography department. Since then, I have bounced back.

Cinema became an important part of my work after a second assassination attempt, maybe six or seven years ago. I went into therapy and realized that I was spending so much time avoiding my feelings, emotions, and traumas. I had no verbiage or awareness between my body and my brain. I was trying to connect the ideas to the emotions and to synchronize everything.

For those interested in film photography, what is so special about it? Why would anyone have any extra trouble if everyone has a decent camera on their phone?

I constantly think about it. As technology improves, cameras improve exponentially. The ability for one person to create a technically correct image is getting easier and easier. We start to expect more from the cameras and are quick to absolutely destroy the footage. There is much less tolerance for images that are too dark, too puffy, blurry, etc.

I think we have fewer excuses to take bad pictures, so we quickly call bad pictures because the material is so good. Like, “Yo, this shouldn’t be dark or blurry – this camera is dope. I spent a lot of money to make sure that didn’t happen.

And then there are the film cameras, which stopped getting better in the 90s. The images we get back are often underexposed, out of focus, out of focus, and somehow those horrible photos are the most amazing things. It’s always great fun to collect these images.

I think there is magic when making images becomes a gamble. Movie images are not promised and any type of feedback is really nice, even when the images are bad.

Is it more difficult to film?

Absolutely not. Disposable cameras exist for a reason. My parents and all their friends were using film back then. They’re rotten image makers, but they have more photos and albums than I’ll probably ever do in my career.

I think the difficulty with film is whether or not you can take a picture and trust the process. And then you have to do it 36 ​​more times until the roll is done, which is great, but shocking at first. Most of us are wired to make movements that we know and can see.

Digital photography is like, “Yo, take your shot!” Well, look now! Oh nice, but maybe it’s a bit dark. Try again!” You correct as you go based on what you see in your photos. The process is incremental, linear, and real-time.

Film photography is like: “Yo, take your picture! Ok neat! You have made a decision! Oh, you only get 36. Plus, you paid for it. Oh, also, I’m sensitive to light. So like, be careful. I hope all of these decisions worked out for you! And it’s not until a week or a month later, when you’ve finished your roll and developed it, that you find out if you screwed up or not. And when you’ve messed up, there’s no redress. Just live with it, absorb it, and then believe you’ll do better next time.

FilmX started as a small side project for me. Using a film camera helped me look at my life in a way that wasn’t scary. It helped me recognize my own existence in a way that didn’t make me feel broken. I avoided therapy for so long. I just didn’t want to admit to myself that I needed it. The film helped me without ever feeling like anything was out of place.

After seeking help from mental health professionals, I wanted to find an accessible way to release this feeling. I wanted to share film photography with anyone because it changed my life so much. So I decided to buy a disposable camera every month, give it to a random person, then tell them I would develop and scan it for free.

I just want to help people slow down their lives for a second and recognize the very life they’re living. What better way to do that than to take a photo?

After developing and scanning a handful of disposable products, I wanted to start curating all those little quiet moments people have and show everyone that recognizing yourself in the life you’re living doesn’t always have to be obvious or a great gesture. It doesn’t even have to make sense.

So that’s the heart of FilmX. It kind of evolved when I decided to create a space dedicated to the filmmaking process. As the space grew and I started pouring my own money into it, a few friends jumped on board and we formed a little collective. We pooled our money to pay for film chemicals and help each other develop and digitize films just for us.

The more support we received, the more we invested in better chemicals and equipment and accidentally became a fully capable film lab. The support was really neat. I never really wanted to make it a business, but I realized that if I had more support, especially financial, the easier it would be to introduce film photography to more people.

What is the film’s journey from deposit to delivery?

The film is deposited in a safe outside the laboratory. I bring it inside the lab and put a sticker on it with a number to help me keep track of the rollers. I have two film processors – one for color and one for black and white – and it is processed on the appropriate machine.

After processing, I hang the film to dry. It usually takes up to 8 hours. When the film is dry, I scan it and turn it into digital files. The film is usually a negative image, our software reverses the images to positives. While waiting for the computer to run the reversals, I cut out the negatives and put them in archival sleeves.

I deliver a download link via email, and the physical negatives are archived and ready to be picked up locally or shipped.