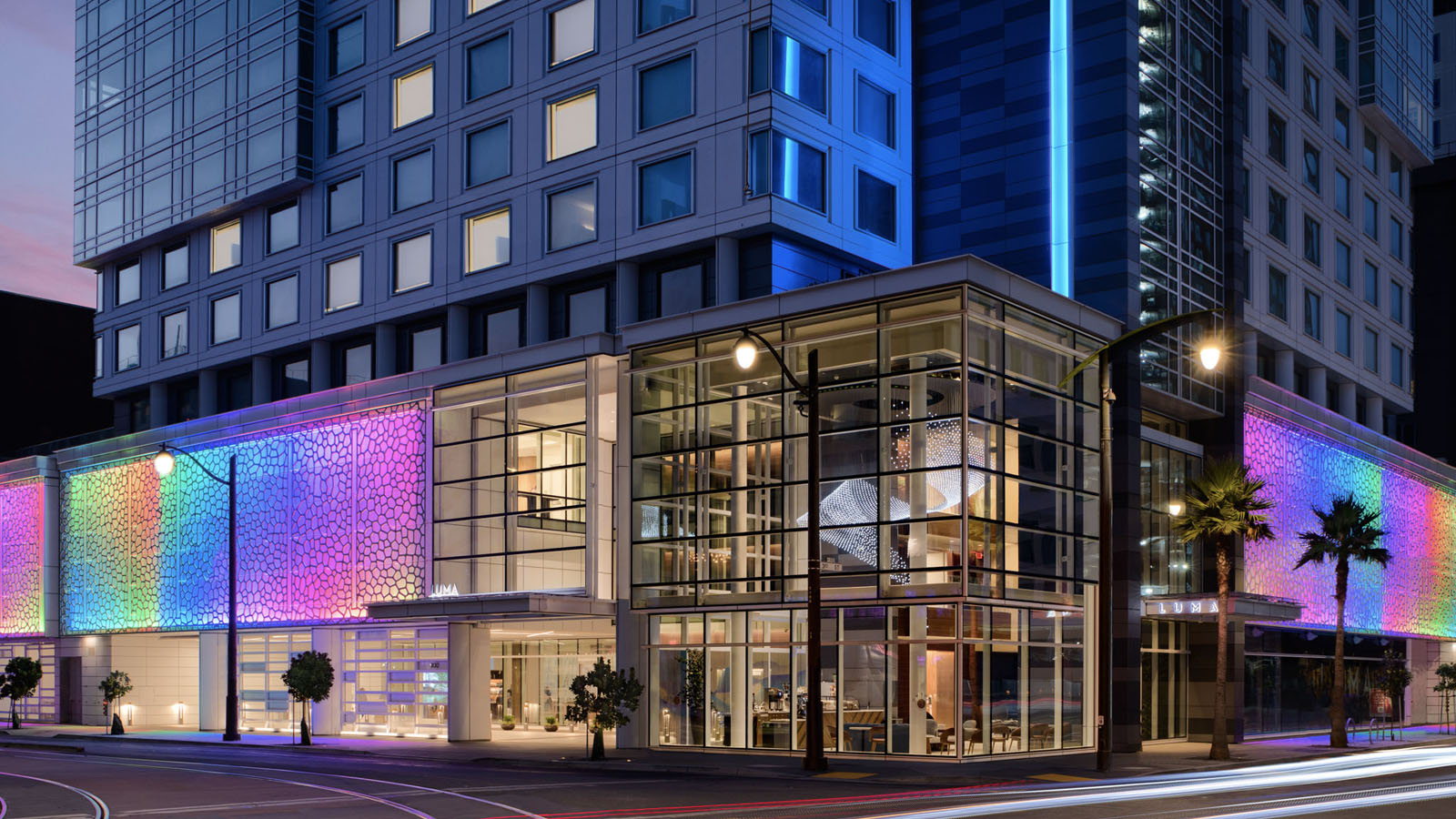 The project featured today by architectural photographer Dylan Patrick is a brilliant take on hospitality photography. As Dylan showcases the LUMA Hotel in San Francisco by architect Hornberger + Worstell, you’ll notice his striking compositions, each easy to read and heroic in their own way.

A recurring theme throughout this project is excellent lighting design. Dylan photographs each space at the optimal time of day to convey mood and detail for us observers. Hornberger + Worstell’s thoughtful design harnesses the dreamy sunlight of San Francisco’s west coast. The project is entirely designed by Jackie Hui, whom Dylan presents again and again. Not to mention its focus on a truly stunning bespoke LED light fixture by artist Jim Cambell.

Dylan kicks things off by sharing, “I spent a week shooting photos and video for the new LUMA hotel in San Francisco. The company that owns this property is one of my oldest clients and I was lucky enough to have photographed the first LUMA in New York when it opened in 2018. They are based in San Francisco so that’s a flagship property. It’s also their own brand, which is fun because it means I don’t have to be bound by some of the constraints of typical brand photography standards.

He continues, “One of the most challenging aspects of shoots like this for hotels is always the location and occupancy of the property. LUMA SF is located in a brand new area of ​​San Francisco which they call SOMA (South of Market). The location is great, right by the bay and the hotel is literally a 5 minute walk from Giants Stadium. The whole building is new construction, as is the whole neighborhood, so there’s a lot going on and there are a lot of new residents and guests to work around. This particular week was high occupancy.

My favorite series of images from Dylan’s LUMA Hotel project can be found in the String coffee bar. He makes it outrageously easy to love this series – the skies, leading lines, silky colors and warm directional light all play into the cheerful morning mood – exactly the kind of mood you want when portraying this guy of space.

He breaks down the process for us, saying, “While there is always wiggle room in a schedule to move things around for light or people movement, sometimes you get the timing or the timing wrong and you have to get out of it. For morning shots of Twine, their in-house coffee bar, I basically needed to shoot when everyone wanted coffee. So we had to shut it down for a short time to capture that.

Morning light when not cloudy is quite nice and since the name of the hotel is LUMA I really wanted to play a lot more using harder directional light (which isn’t always good welcomed by brands) for it to be a theme through the images. However, that morning there were thick, extremely fast-moving clouds that literally changed the light mid-exposure, and for this shot we decided we didn’t want people outside. So I needed a few shots to work the exterior and interior and catch it all with some direct sunlight. In the end, I ended up settling for a bit softer light which I ended up really liking for an angle. You feel like the light is just starting to come through the clouds, you still get the contrast of the shadows, but it’s a bit more subdued and soft.

Dylan continues “For the second angle, I waited a few hours to see what would happen with the light and managed to get it with a more directional light that lines up pretty well with the front counter design. “

“A few days later, I caught an aerial detail of a morning light balcony which I think connects the three well with some people for context, blurred to be unrecognizable in use,” says- he.

This aerial perspective is my favorite. People add breadth and life to the scene. The long shadows and warm highlights are really apparent here. This image completes the set and is definitely the icing on the cake for me!

When entering the rooms of the LUMA hotel, we will start with the penthouse. Dylan sets up a brilliant composition that highlights the massive glazing that overlooks the water. I like the linear repetition here. The clean line of the ceiling is echoed by the lines of the window frames. As our eye descends, the horizon on the water creates its own line. Then we meet the line of the glass balustrade on the balcony. Throughout the frame, as our eyes scan, they meet line after line. The pacing of this scene is just adorable.

Another big aspect that Dylan includes is, of course, light. The shiny, specular reflections of the water add a warm feeling and help us get an idea of ​​the time of day. Bright spots of light on the floor and furniture communicate this same feeling.

“Rooms are bright, clean and beautiful with a few simple but effective splashes of color. A recent trend with this company is to install massive windows in guest bedrooms, which to me is amazing. Even the standard rooms are 4-5ft square windows, so most require very little flash, maybe just a pop or two,” says Dylan.

“I leaned a lot on shooting in morning and afternoon light, not being too hesitant if direct sunlight entered a room. I had to deal with some buildings being lost by the windows in most of the east facing rooms in post but it turned out great in the end.I’m going back in the spring and the buildings will be finished so I’m going to take some of those views and replace them later. Most of the room shots are in dominant natural light with a few flashes here and there blended in for a refined feel, but well hidden and blended I think,” he shares.

When night falls, that’s when LUMA really starts to – ahem – shine. The lighting design of this place is just amazing. Dylan gives us a preview, telling “The twilight exterior was quite a challenge because due to the size of the front room, getting exposure that you could see Jim Cambell’s room meant shooting that section a lot later than I don’t usually shoot outdoors.

There is a tram that runs right in front of the hotel so all those cables and wires had to be mailed out, but overall I’m very happy with how it turned out. The lighting on the sides of the building and in the front is designed by Jackie and really adds to the LUMA brand and vibe.

He continues: “The fully covered and hidden valet entrance is also super cool and very convenient for exteriors, as it can sometimes be difficult to keep these areas clear and get cars moving.

Dylan says: “The Jim Cambell-designed LED light art fixture in Twyne was easily one of my favorite shots. I intentionally let the exterior get darker and cooler to let the light fixture pop more, then lit the space with a flash and blended it in with ambient frames. The fixture moves like a waterfall and features video of people climbing it…it’s pretty amazing.

Each bulb is individually hung and programmed for sequence. Jackie Hui, the hotel company’s lighting designer, was also on hand throughout filming to darken sections and brighten sections as needed, which is always helpful and a time saver.

What an awesome project! Many thanks to Dylan Patrick for submitting it to us here at the APA. It’s always a pleasure to see what you all create and to hear what goes on behind the scenes in creating these wonderful images. Dylan would also like to thank his retoucher, of whom he is full of praise! Dylan collaborates in his post-production process with Jamie Gragg of Semblance Retouching.

Check out more of Dylan’s brilliant work at www.dylanpatrickhospitality.com and on Instagram @dylanpatrickphoto.

If you have a project that you would like to be considered for the project of the week, you can drop it here.

2022-11-04
Previous Post: What to see during the Month of Photography in Bratislava
Next Post: Spotlight: From Bowie to Beyoncé, Markus Klinko’s celebrity photography has defined the Aughts