CAR wrecks in the deserts of California sent former Buzzcocks drummer John Maher wandering the Hebridean wilderness with his camera late at night. “I was watching a documentary series about a couple who toured America with a hodgepodge of art,” the 62-year-old says from his home on the Isle of Harris.
“One night they introduced an American photographer called Troy Paiva, who does long exposure night photography of old American cars in the California desert. He was adding extra light during the exposure. That was inspiration enough for let me do what he was doing, but in the Hebrides.
Maher, originally from Manchester, has lived on the island for 20 years and runs a high-performance VW engine business. Advancing his hobby, photography, was part of his ambitions when he moved north, but he needed a boost to encounter the art of Paiva, thousands of miles away. there, years later.
“I had to wait for something to inspire me, because for some reason I literally didn’t go out with my camera for seven years,” he says.
The results are worth the wait. Over the years that followed, Maher collected a series of photographs depicting intimate scenes of abandoned homes and buildings around the Hebrides, often spending hours crossing moorland in the dead of night to illuminate homes where no artificial light was available. fell years ago.


He says: “One night I ventured inside one of the houses and it happened to be one where a lot of personal effects had been left behind.
“It became an obsession, traveling around the island looking for homes that had been abandoned but hopefully ones that had left things inside because that’s what I have found particularly satisfying. These houses are full of things from the past but not so far in the past. Things I can still relate to. If I go to visit a historic castle, I find it completely boring, because I can’t identify with it. Upon entering one of these houses, even the small ornaments scattered about remind me of certain periods of my own life.
“I remember going into the kitchen of a house and there were just the taps – they were the exact same taps as in my mum’s and dad’s house. No big deal for someone else but something for me.
“I was fascinated that these things had been left there and untampered with for so long. And as a boy from Manchester, the idea of ​​a house being left empty for twenty years and not being completely trashed, well, that would just never happen.
The obsession led to an exhibition, Nobody’s Home, first shown in 2016 in Fife, Cumbria and Glasgow. It will be reassembled this summer, along with recent unseen photographs, at Dunoon’s Burgh Hall in an exhibition that will run until September 4.
One of the new images, framing the crumbling gables of a house in Watersay, off Barra, in the warm light after sunset, echoes tragically. It was taken in the days after Eilidh Macleod’s body was returned to her home island, after she lost her life in a Manchester Arena bomb blast in 2017.
Maher was in Barra when he saw the shocking image of Eilidh’s coffin being loaded from the Loganair plane towards a hearse on the iconic beach runway on the front page of a newspaper in Castlebay Church. 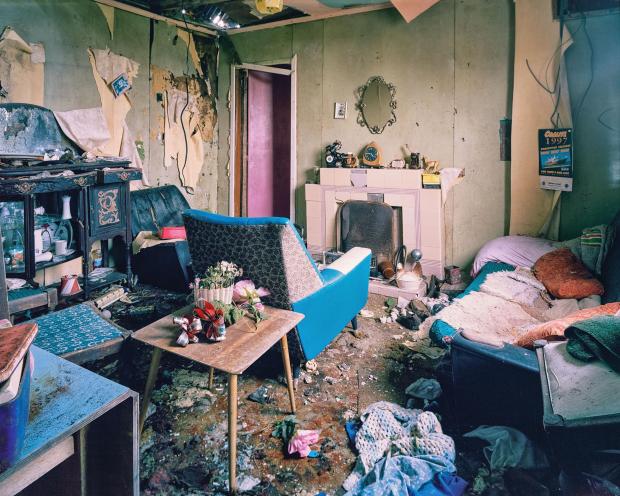 Maher is happy to discuss the motivation and context for this image, but is hesitant to spoon interpretation for other photographs.
“I’m very happy that people are watching them and giving them the spin they want. It’s a bit like listening to a radio play and the old cliché that the best visuals are in your own head. And with a big print on the wall of those scenes, well, I did the hard work of taking the picture. I’m not going to tell you what to think.
Maher’s world is now a far cry from the days when he toured the world as drummer for the Buzzcocks.
He joined the band as a teenager in 1976 and played with them until they broke up in 1981, reappearing occasionally as the band reunited over the years until his final appearance in 2012.
When the band broke up in the 1980s, they “drift” to work with VW engines after pursuing their other passion, drag racing.
From the front end of the British punk curve of the 70s and 80s to crawling through fields in the dead of night on the fringes of civilization, it’s quite a contrast, I suggest.
“There are people who move here when they retire and a lot of them get laid off by a winter,” he laughs.
“If I think about it like other people, then maybe it’s weird,” he says. “But I think it’s a cool thing to do.”

Nobody’s Home, in association with Street Level Gallery, is at Dunoon Burgh Hall until September 4